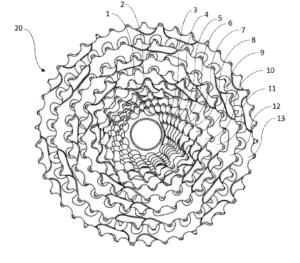 Rumors and leaks about a forthcoming Campagnolo 13 speed shifting system have been flying recently. Thanks to two US patent applications published on July 30, we now have a few more details thanks to the Campagnolo 13 speed patent application. The patent filing titled COGSET WITH INCREASING JUMP, US 2020/023105 is the most telling. Highlights: 13 sprockets out back, with the smallest option counting 9 teeth, the biggest at 44 teeth.

There are still plenty of unknowns about what will be coming out of Vicenza – we don’t know if the system is 1x or 2x up front, but given the tiny 9 (or 10) tooth smallest cog, it seems likely a single front ring will be the choice. For instance, pair it with a 40 tooth chainring: At the top end, a 40×9 gear is equivalent to a 49×11 (120 inches), and a bottom gear of  40×44 checks in well under  a 1-to-1 ratio – more on that below. No matter, 13 cogs continues to keep Campy at least one cog ahead of Shimano, though the Japanese company has plenty else cooking.

Rolling in the Dirt

One surprising inclusion in the patent filing is extensive discussion about the invention’s intended use: gravel riding. North American racing is even called-out in the filing’s Background section:

Of course, it is possible that the terrain to be tackled is mixed, with sections that would require a “road” cogset and sections that would require an “off road” cogset; this is the case for example of so-called “gravel” competitions, well known particularly in North America, which take place on paved roads, unpaved roads and pathways. In this case, cogsets called “gravel” are used, which try to provide a compromise between “road” and “off road” ones.

However, the search for this compromise is anything but easy, given the fundamentally opposite nature of the requirements of the cyclist in different conditions. Known “gravel” cogsets aim to simply combine in the same cogset both very small sprockets (for road use), and very large sprockets (for off-road use).

Therefore, there is a problem of improving the features of a “gravel” cogset so that it manages to better satisfy the multiple requirements of the most demanding cyclists.

Campy’s solution for gearing that’s wide-but-close spans three different 13 speed cogsets: 9-42, 9-36, and 10-44. Moreover, the focus is on steady increments in gear ratio change from one cog to the next. Consider the three different cogsets listed:

The goal is ratio numbers that don’t vary much. Which means a steady difference between adjacent gears, seeking to minimize big jumps that can make some 1x systems feel awkward. Shifting from 9 to 10 teeth is 10% change, but 30 to 31 teeth is only a 3% change, so larger jump numbers between larger cogs isn’t problematic. But even with 13 cogs, there are still some leaps – the biggest being the jarring 26 to 32 tooth shift on the 10-44 setup, a 19% change.

A second Campagnolo patent application, BICYCLE SPROCKET AND SPROCKET ASSEMBLY COMPRISING SUCH A SPROCKET, US 2020/0240506 suggests there may be even bigger cogs in the works. Herein, 46, 48, 50, and 52 tooth cogs are described, in the context of spaces and spurs built into the rear cogs – more commonly referred to as shift ramps. Of course, ramps that ease the chain between cogs get ever more important as the jumps between cogs get bigger.

Perhaps some of you may get uppity and start fuming that intellectual property claims on gear ratios is evidence that the patent system is broken, that innovation is being stifled, etc. Please remember this filing is an application for a patent, not an issued patent – and only issued patents provide the coveted exclusive rights that inventors seek. The next stage is for the application to be examined by the US Patent & Trademark Office, where what’s claimed must overcome the hurdles of being both new and non-obvious. Those two simple terms have long, complicated meanings in patent law, with country-by-country variations as well.

Campy’s claims are directed to particular combinations of cog sizes in relation to each other, described as grouping subsets. There’s no attempt to stake broad ownership of using 13 cogs out back. Patent claims often get amended and narrowed in scope in an attempt to reach allowance, and many applications are abandoned when unable cross the threshold of new and non-obvious. What, if anything, may issue into a patent here is likely several years away – my guess is that this application will face Croce d’Aune sized obviousness rejections. Which could even cite the now-quaint Suntour freewheel board.

No matter, as the patent filings have at least given us a sneak peak. Meanwhile, with the press of a thumb, Campy lovers may soon be slamming across 13 cogs, all the way down to the 9 (!) – something Tullio could hardly have imagined.

A version of this article first appeared on CyclingTips.com