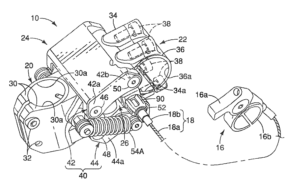 Dropper seatposts have become standard equipment for performance-level mountain bikes. Could the same concept … altering the position of a bike-fit component while riding … also work for a handlebar stem?

A fresh patent application shows that Shimano thinks the idea has merit. On 5/14/2020, VARIABLE STEM FOR HUMAN POWERED VEHICLE, was published by the US Patent & Trademark Office, with Shimano as the applicant. The document shows numerous versions of a system that allows handlebar position to be changed on-the-fly.

Shimano describes numerous versions of the invention, which vary greatly in complexity. All use a similar stem configuration – a parallelogram linkage that can swing up and down. The linkage design is reminiscent of Softride’s suspension stem from the 1990s. It touts positioning the stem high for descents, level on flat terrain, and low for climbs – the opposite of a dropper post.

Shimano’s simplest version, seen above, uses a manual, cable-actuated control and a release mechanism inside the stem. Flick the handlebar-mounted lever, and the rider’s body weight presses the stem downward; hit the lever again, and springs push the stem upward for a higher handlebar position.

More deluxe systems follow. An electrical version uses a switch on the handlebars, coupled to a solenoid for the release mechanism. Another electrical version uses a motor to change the position of the stem, rather than a rider’s weight and springs. The motorized stem can be connected to and controlled by a central microprocessor, where Shimano dives down a deep rabbit hole of technical possibilities.

The variable stem is most prominent in the patent application, and the focus of the claims. But there is a boatload of additional technology described as well: In short, they describe a sort of central nervous system for a bicycle. For instance, stem position sensors that communicate with suspension damping: set the stem low for climbing, and shock damping increases to reduce bob. When the stem is high, it’s a descent, so let the shocks dance. Ditto for a dropper seatpost, but in reverse. And all this can be automatic, with an inclination sensor that knows the slope of the terrain.

The patent application describes controlling of the position of the stem based on the “driving state”, which includes at least one of riding condition, power, torque, cadence, velocity, acceleration, vehicle weight, weather, road surface condition, travelling route, a suspension state, a height adjustable seatpost state, a shifting device state, a braking system state, an assist unit state, a lamp state, and a cycle computer state.

Want more? There’s sensing and control of a pedal-assist motor – if the slope goes up, the stem goes down, and the motor kicks in more watts. Optionally, put heart rate or powermeter data in the mix as well. Or getting Orwellian, the processor knows your location from GPS, has your riding history data, and adjusts component settings accordingly, knowing the terrain you’re on at any time.

How Long Until It’s Available?

When might we see a Shimano dropper stem – not to mention all the other electronics? That’s hard to say. Shimano offered a polite “no comment” about this patent application, as usual. The company applies for patents on many inventions, and certainly not all become products. Sometimes, a patent applicant has little interest in commercializing a design, but protects intellectual property to make entering the space more difficult for their competition, or create leverage for partnerships.

Stem aside, other recent Shimano patents and applications also focus on electronics and sensors, so it looks like a strong area of interest for the Osaka-based company. I’d guess it’s very likely that Shimano will file additional patent applications based off of this one (“continuations” in patent-speak) and related to the sensor system, perhaps with additional technical details. This invention warrants a close watch, which we’ll be doing – stay tuned.

This article first appeared on VeloNews.com