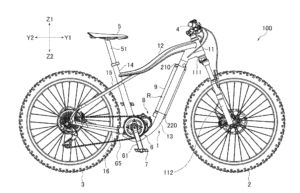 Yamaha’s e-bike frame patent belies that the Japanese industrial giant Yamaha may not yet be a prominent name in US bicycle retail shops, but the company’s patent filings suggest strong interest in the US ebike market. Yamaha ranked fifth for bicycle industry patent grants in the US in 2019 with 15 total, ahead of leading brands like Giant (10 patents) and Trek (5 patents). But behind leaders like Shimano and SRAM.

Yamaha Motor Company is best known for their motorcycles, along with boats, ATVs, and more, with 2019 revenue over $15 billion USD. But they have also been a pioneer in ebikes, starting in 1992, with 4 million units sold to date worldwide – about half of that in the Japanese market.

A recent US patent application, ELECTRIC BICYCLE, published March 12, 2020, shows that Yamaha is looking beyond their core strength of motors and batteries, and re-thinking the bicycle frame when it comes to ebike design.

Where and how to mount batteries to an ebike is a significant hurdle in frame configuration, with a long list of patents focused on just that. The constraints are that the battery needs to be accessible for service – or easily removable for swapping-out, as with some fleet bikes – while being unobtrusive and secure.

Yamaha’s patent application claims a bicycle frame with a split downtube configuration. The design uses one or more base pieces behind the headtube – like a stub of a downtube. In place of a traditional downtube are parallel plates, which connect to the base piece(s) at their upper ends. The lower ends of the parallel plates curve under the frame’s bottom bracket area, when the electric-assist motor is housed – or in some embodiments, join a bracket that wraps above the BB/motor area.

The space between the plates is where a battery is housed, and Yamaha describes what they say are advantages to such a mounting system. Their reasons: aesthetics, with the battery tucked between the tubes it doesn’t “unnecessarily stand-out in appearance”; a low center of gravity for the battery weight; that the battery may be configured for removal in a downward direction, which is easier for a user than lifting a battery upwards; and the option for excess battery heat to be transferred to the bike’s frame through conduction. Also claimed are shock absorber mounts between the battery and the frame.

This design is not yet in-use on any of Yamaha’s ebikes. But the company told BRAIN that they may utilize it in future models, or possibly license it to others. “We have a ‘future eBikes’ page on our website which may provide a sneak peek toward part of our future https://www.yamahabicycles.com/future-ebikes/”, Yamaha corporate told BRAIN in an emailed statement.

Yamaha’s e-bike frame patent application does not appear to disclose in groundbreaking new technology, compared to what’s known and in the market – though the invention may still very well be patentable. Rather, like other companies, Yamaha is thinking about ebikes holistically – adapting a frame to the motor and battery, rather than the other way around. Moreover, Yamaha’s numerous recent US patents and applications show that it is spending money to protect intellectual property in this country – underscoring that their eye is on the rapidly growing US market for ebikes.

When asked about their plans for the US, the company responded, “Yamaha believes that the fantastic growth we have seen in recent years (in the US) will extend for a continued period of time.  We plan to keep providing product and technology to this exciting and growing market.”