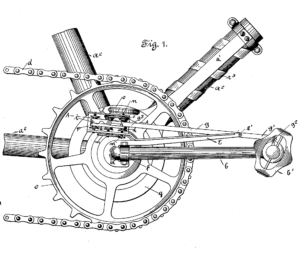 Inventions invariably build on what came before – “Prior Art” in the patent world. A great example is the bicycle powermeter.

About 15 to 20 years ago, power output (in Watts) became the gold standard metric for quantifying cycling performance.  Longtime insiders know that the SRM crankset emerged in the early 1990s, with Greg LeMond as an early adopter. SRM inventor Ulrich Schoberer deserves credit as the pioneer of bicycle power measurement, with his SRM cranksets being the first reliable powermeters. SRM sparked the fire in the market.

But Schoberer wasn’t plowing a lone furrow. SRM began in 1986, while around the same time Look had their ill-fated MaxOne power measuring hub.  Other obscure attempts included the Power Pacer hub from Balboa Instruments.

So who “invented” the powermeter? Consider Charles A. Perkins, of Knoxville Tennessee. On May 13, 1896, Perkins filed an application with the US Patent & Trademark Office for an invention titled: BICYCLE –DYNAMOMETER.  On Feb 12, 1902, it issued as US Patent 667,920. In it, Perkins discloses a purely mechanical system for bicycle power measurement.

A brief overview: one end of a lever is attached to a bicycle crank arm, near the pedal. The other end of the lever holds a pencil tip, which records the deflection of the lever onto spooled paper, near the center of the crank. The paper spool is wound by a roller, with the roller driven by the side of the chainring.

The lever records the deflection of the crank (in theory anyway), and thus applied torque can be calculated. The patent describes using the speed of the bicycle, and time, in conjunction with the torque measurement, to calculate horse-power or work (Watts were not yet in use as a unit!). There’s a description of calibration methods for torque due to different crank flexes. Just like the SRM, torque x cadence = power, with calibration.

The results of this purely mechanical technology were surely unusably rough, and the concept of bicycle power measurement went dormant until the age of electronics. But it’s a classic example of how most inventions don’t break new ground all on their own. Even the Perkins patent refers to prior bicycle dynamometers, but which only measure “the direct-thrust of the leg”. An early SRM patent includes a prior art reference to the Perkins patent.

An uninformed cry of being “ripped off” by a competitor often lacks understanding of how incremental many inventions are – and of course what’s in the claims of a patent. Prior art is the big factor in how broad a patent’s claims may be, and possible infringement.

Bicycle power measurement is a special area of interest to me. In 1996, after being inspired by the SRM, I began developing a bicycle powermeter (along with two partners). We licensed the patents to Polar Electro, which manufactured our chain-vibration sensing powermeter  for years. Eventually, advances in electronics let other systems emerge and made our technology obsolete. But patents had drawn me in, and with a degree in mechanical engineering, I took the Patent BAR exam and launched a career as a Patent Agent in 2001.