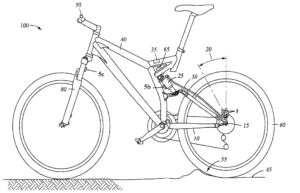 Recently published Fox Racing patents show that the company may be adding crankarm sensors to its super-techy Live Valve suspension system. With cranks in the Fox portfolio under the Race Face brand, this suggests the company is angling to bolster its presence as a wide-ranging OE supplier through component bundling.

Current Live Valve systems include electronic sensors to control compression damping for both front and rear suspension. Sensor  types include front and rear accelerometers, as well as orientation sensors to determine if the bike is climbing, descending, or even unloaded in mid-air. Sensors are wired to a central microprocessor, which controls damping of both shocks simultaneously. Fox says the system responds to sensor input in 3 milliseconds – orders of magnitude faster than the time it take a rider to flip manual lockout levers. Lockouts and/or variable damping are desirable to help eliminate unwanted suspension movement, or pedaling bob, particularly when climbing hills.

Patent filings from Fox show additional sensors that may be part of the system, notable a crank sensor. US patent application 16/902,9, published Oct 1, 2020 is part of a family of Fox patent filings, with parent applications that date back as far as March 2009. This patent family is focused on the technology that Fox has produced as the Live Valve system, with the patent description also disclosing applicability to suspensions for other vehicle types in addition to bicycles. Live Valve suspension is used in the Ford F150 Raptor truck, as well as some models of the Polaris Dynamix UTV.

Specifically, the ‘907 application describes one of the sensors as a “pedal force sensor”, while also suggesting that it may measure acceleration only. This could mean a powermeter type sensor on the crank, similar to what’s offered by Stages, 4iii, and others. In that case, increased pedaling effort (signifying climbing or sprinting) could signal the system to lock-out the suspension, perhaps in conjunction with input from other sensors.

Or, a much simpler arrangement would use an accelerometer to measure pedaling cadence – where a rider coasting signals dampers to open up and let the suspension be fully active.  Use of a crank sensor to modulate suspension has also been done by French company LaPierre, with their EI system, which they tout as “the first intelligent suspension”.

Live Valve suspension paired with sensored cranks could conceivably open the door for additional OE offerings from RaceFace including handlebars, stems, pedals, and wheels .  Also in the Fox portfolio is Easton, with a similar product selection as Race Face, but focused on road and gravel bikes. Nonetheless Easton could be part of a Fox OE sales package, with Live Valve as the crown jewel technology.

Notably, financial information in the same Fox investor report show the company spent $4.4 million in 2019 on patent litigation. In Q3 2020 alone, they spent $1.6 million on such patent battles. While detail on these costs is not available, they’ve likely been incurred in Fox’s long-running intellectual property disputes with SRAM.

Fox and SRAM have been engaged in a web of patent lawsuits against each other dating back at least to 2016, involving claims on chainrings, thru-axles, and suspension. In addition to producing drivetrain, brake, and other components, SRAM also owns Rockshox suspension, Quarq powermeters, Zipp wheels, and Avid brakes. While Fox does not offer derailleurs, shifters, or brakes, the two companies are direct competitors for OE and aftermarket sales in suspension, cranks, cockpit, and wheels.

Live Valve was released in 2018, after years of development. It currently adds approximately $2000 (CONFIRM) to the retail cost of a bike – a steep sum. OE spec has been limited to some high-end models from Giant and Pivot. Fox does not offer a general retrofit kit, and says the system only works with frames that are designed to be Live Valve compatible.

Will Live Valve be the arrowhead for Fox to increase their OE sales? Spec sheets for new bikes over the next few years will tell.