Do Campagnolo wireless shifting patents answer the burning question from the tech tifosi: Will Campagnolo soon have wireless derailleurs? Patent applications can give a sneak peak of what’s in the development pipeline, and a perusal of what Campy has on file with patent offices worldwide shows plenty of wireless technology.

It’s certainly no surprise that the Vicenza-based company has been doing R&D work with wireless. In 2011, their EPS system was second to market with wired electronic shifting, following Shimano’s 2009 introduction of Di2. Then SRAM’s etap debuted in 2015 as the first wireless derailleur set-up (of course, a nod to goes to Mavic for their 1990s Zap and Mektronic systems). Speculation about Shimano wireless is at full boil, both through patent filings and FCC applications.

What might be coming – sooner or later—from Campagnolo? Here are the top picks of what I’ve found in reviewing the last ten years of the company’s patent applications. They have many more filings at patent offices worldwide, with the below being the most revealing. But first, a caveat: Drawings in utility patents don’t need to be representative of what a consumer-ready product will look like. The illustrations simply need to support the patent’s claims.  In short, utility patents protect how something works or is made, not how it looks.

Campagnolo’s patent applications cover a number of different rear derailleur configurations that include wireless features. The ‘104 application, titled “Bicycle Electric Rear Derailleur”, shows a rear derailleur with an integrated, removable, rechargeable battery pack. The battery may be used to power both the actuation of the derailleur, as well as a wireless communication circuit – the example given being Bluetooth. The battery is described as advantageously hidden in the dead space within the parallelogram of the derailleur: “In this way, it is better protected against impacts and less visible.” Bellissimo. An alternate embodiment shows a non-removal battery, with a charging port built into the derailleur.

Some different technology is shown in patent application ‘881, titled “Bicycle Wireless Electronic Derailleur”. Here, the focus is on a magnetic sensor that is used to detect motion of the chain – there’s also a front derailleur shown with the same sensor type.  Chain speed sensors are not new, and have been of particular interest to me. The goal here is for chain motion to provide a wake-up signal to the shifting electronics to preserve battery power. This is a bigger concern with wireless than wired systems.

Sharp-eyed readers may notice what looks like a wire protruding off the derailleur in the drawing above. The set-up is described as being wired or wireless – the latter term appearing 58 times in the patent application. Remember, the drawings may not tell the whole story. Component 242, “wireless communication device” is shown in a block diagram, but not called-out in views of the front or rear derailleurs – just to keep us guessing. 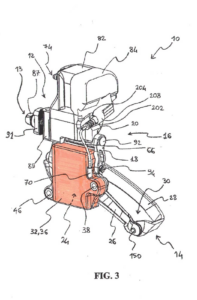 Campagnolo discloses wireless front derailleurs in a similar spirit to rear units. The ‘960 application shows a battery housed on the inside area of the front derailleur. That battery can power both the derailleur actuation motor, and wireless communication: “Preferably, the communication circuit is of the wireless type, for example according to Bluetooth® protocol”. The battery’s position would be difficult to access with the derailleur installed on a bike, and indeed the patent document recites a charging port, not a removable/swappable battery.

Compared to a derailleur with a motor and hard-working battery, an electronic shifter is relatively simple. Shifter batteries can be small coin-cell types, as they simply need to transmit a signal, and perhaps run a processor.

The  ‘150 patent application shows levers where each includes a control unit, which send signals to derailleurs – and/ or to an electric-assist motor – via wires or wireless methods.

So what’s to make of all these Campagnolo wireless shifting patents? Here are three possibilities:

So which is it? Companies almost never want to comment to the fourth or fifth estates about their patent applications – so it’s impossible to know what Campy’s product plans are of course. We’ll keep our eyes on pro teams that ride Campy-equipped bikes – a common attention-getting ploy in which “secret” new products are deliberately leaked.

A version of this article first appeared on CyclingTips.com