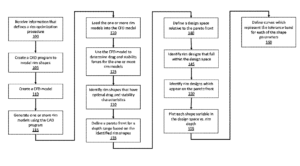 Trek is getting highly analytical when it comes to how bicycle rims slice through the air. Not long ago, advances in bicycle technology were often seat-of-the -pants efforts – use of the term “engineering” would be generous. But in the ceaseless pursuit of faster bicycles … and efficient manufacturing … Trek steps-up with computational fluid dynamics, pareto fronts, and more.

US Patent application 2019/0213785, “SYSTEM AND METHOD FOR RIM SHAPE DETERMINATION”, filed Jan 9, 2019, was published by the US Patent & Trademark Office (USPTO) on Jan 9, 2020.It claims an invention  that bicycle riders, shops, pro teams, etc. will never be aware of.  Indeed, the invention is applicable only to engineers working on the bleeding-edge of high-performance bicycles  – but it could rapidly advance wheel  design.

This is a patent application that gets deep into the mathematical weeds. Consider, if you will, paragraph 56:

In the simple version, rim width and depth are provided, and the system uses computational fluid dynamics to generate an optimal rim shape – one that minimizes drag, as well as side forces that affect stability. A more complex version includes software that develops a pareto front – an engineering approach which seeks best outcomes of multiple combinations of choices.  Some of those additional choices discussed include the curvature of a rim’s sidewall, the interface of tire and rim, and more.

For example, make the rim deeper in cross section, and that may lower drag, but also decrease stability. Change the curvature of the rim’s cross-section, and the drag and stability may also change. The pareto approach seeks the best combinations.

What does this mean for anyone who isn’t a bicycle wheel engineer? This technology looks to accelerate wheel development and reduce R&D costs. Consider the primitive, iterative approach: design a rim, make a few expensive prototypes, and then test in the windtunnel and on the road. This invention allows much of that to occur virtually – of course, the resulting designs still need real-world testing. Trek’s invention could in principle streamline (oh yes!) the design process for their Bontrager line of wheels, allowing optimal rim shapes to be much more easily identified, whether for gravel riding (and their ceaseless increase in width), or for time trial and triathlon uses.

I am puzzled why Trek decided to pursue a patent on this, rather than keeping it a trade secret. A patent requires full disclosure of how to make an invention in exchange for exclusive rights, whereas with a trade secret a company keeps details hidden from outsiders. It seems almost impossible for Trek to detect if one of their competitors were copying this approach, as the invention is a computer process used by only a handful of engineers. It’s not like a Specialized’s lumpy  chainstay protector that’s in plain sight. I’m not privy to Trek’s intellectual property strategy of course, so I’ll assume they have their reasons for patenting.